Exploring the potential uses of Biochar

“Bio-char is proving to be the greatest, most significant and beneficial revolution in organic growing techniques in half a century.
Used properly and wisely it could resolve problems of world hunger by revitalising and permanently enriching impoverished soils.”

Biochar production is modeled after a process begun thousands of years ago in the Amazon Basin, where islands of rich, fertile soils called terra preta (“dark earth”) were created by indigenous people. Anthropologists speculate that cooking fires and kitchen middens along with deliberate placing of charcoal in soil resulted in soils with high fertility carbon content, often containing shards of broken pottery These soils continue to “hold” carbon today and remain so nutrient rich that they have been dug up and sold as potting soil in Brazilian markets.

Biochar is used to improve your soil storing nutrients and water which the plants take up by their roots, as they need them 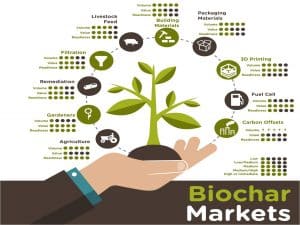 The need for carbon intelligent solutions is growing increasingly urgent. Biochar is one of the key technologies for the new bio-based economy. Biochar will be one of the most important raw materials for sustainable building, electronics, consumer products, energy, health and agriculture. Alternatively, you can contact us using the details below: