This very handy, multi-purpose kiln is designed for Gardeners and Community Garden Groups to become passionate Biochar producers using woody pruning material. With the cleverly designed 2-wheel SmartCart, this model is highly mobile. Beyond char production, the Compact can also come with a swing over stainless steel Grill & BBQ Attachment (optional). Heavy duty, height adjustable Spit Roaster – mains power and / or 12Volt battery also available on internet. As with all the other K-T-T kilns this model can be conveniently flood quenched from the bottom up to the desired water level. This can be done, say up to the burn floor, before attaching the swing over Grill & BBQ, keeping the hot glowing charcoal restricted to the top part of the kiln. 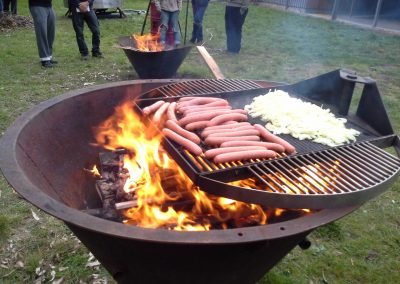 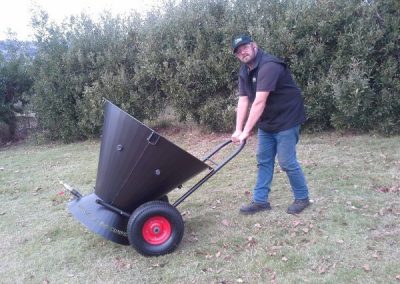 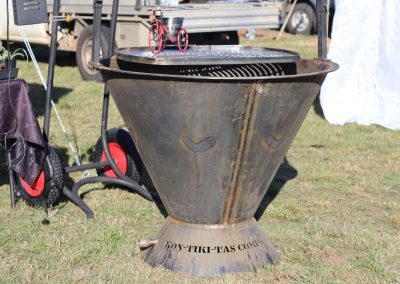 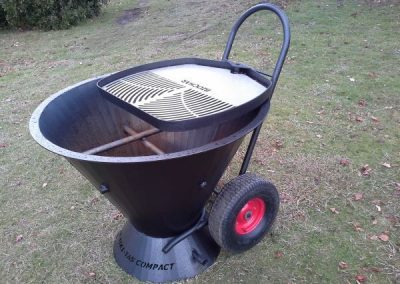 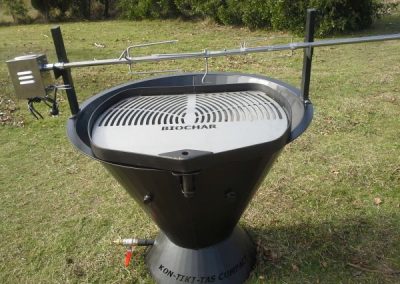 Here’s what our customers have to say:

I managed to do my first burn on Monday. I didn’t have a permit but I
felt that the rain would’ve made the chances of the fire spreading very low.

I was very surprised at how well the burn turned out. I had watched the
youtube video to get hints,
so I knew that the time to dump more garden waste was when the top of
the charcoal was getting white.

But considering this was my first burn, I knew that the chances of
getting a perfect result were slim. I was also dumping grass clippings
and other small sized garden waste on it too, and knew that this would
restrict the airflow.

I filled it up with water from the bottom valve. Once I began to see the
water on the surface I turned off the valve began spraying the top and
then filling it up to the top. I left it overnight. The water draining
out was dark rather than clear but left bubbles along the way,
indicating a level of soapiness from the ash.

After it had drained fully I checked inside deeply and was very
satisfied with the amount of charcoal created. There were obviously some
partly charred sticks among it, but far less than what I expected.

For my next burn I’ll start off using the charcoal created and make a
very hot fire before throwing more garden waste on. That should result
in the partly charred biomass getting fully charred.

But overall I am very satisfied, and look forward to developing
expertise in the process. I’ll also be looking to train my wife in
cutting the garden waste into smaller sections.

Alternatively, you can contact us using the details below: